Sermon - "Why Fight? You Have What You Need" (1 Corinthians) 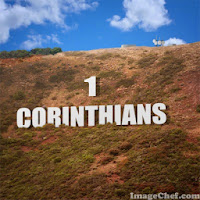 On Sunday, Rev. Joshua Patty preached on Paul's first letter to the Corinthians, the first part of a correspondence in which the apostle tried to help the young congregation deal with the factions that had formed within it.

After Paul had left Corinth, other teachers had followed him, and different people in the congregation decided that different teachers were best.  Some remained loyal to Paul, others to Peter or Apollos.  More challenging, some people in the congregation became financially successful, and they believed that this success was God's validation for their actions -- an attitude they used to justify some terrible behavior.

Paul worked to confront both issues -- the entitlement to bad behavior and the unnecessary conflict -- by insisting that the Christians were wasting their time and energy arguing about silly things.  Instead, they should focus on the central message of the gospel, which will unite them.  Even more, if they remember the central message of the gospel, God's love and generosity, they will come to value every person in the congregation and recognize that each person has things to offer.  This should be reinforced by proper and faithful celebration of the Lord's Supper.


You can also listen to the related Communion meditation.