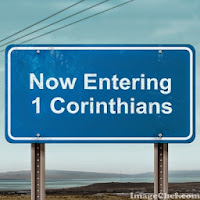 1 Corinthians is the first of two letters written by Paul to the church in Corinth, a city in ancient Greece.  Some scholars believe that the two letters preserved in the New Testament condense several letters that Paul wrote to the fledgling congregation -- there are certainly strong hints of this, including a mention of multiple letters, in 2 Corinthians.

Why would Paul write so much to one church?  Well, it seems that the congregation in Corinth was beset by internal disagreements (what today we probably would simply call church politics).  Different groups in the congregation were forming, often claiming to represent the teaching of specific Christian teachers (like Peter or Paul).  Paul saw great potential in this congregation, and he encouraged them to focus on the roots of their shared faith, which were much more important than their disagreements.

Part of the reason that Paul imagined great things could come of the church in Corinth was that some members were -- or had become -- wealthy.  However, these people seemed to use their money -- and the influence it provided -- to justify bad behavior among Christians.  Some of this bad behavior affected worship because they had turned the Lord's Supper into an occasion for gluttony and drunkenness.

Writing about a variety of issues, Paul seeks to promote behavior that strengthens the entire community.  He worried about how some Corinthians were leading people astray from faith, instead of encouraging and nurturing their faith.  He believed that a better way was exemplified through true celebration of the Lord's Supper, which is a community where everyone is valued and where everyone shares Christian love.

Many of these issues are quite personal.  In these letters, Paul gets drawn into the arguments at times, especially related to issues that are delicate personally, such as money (Paul didn't have much) and marriage (Paul never was married).  As such, some of Paul's comments are more defensive than helpful in 1 Corinthians and 2 Corinthians, especially about women.  However, his description of spiritual gifts, proper worship, and theology of resurrection have guided churches for almost 2000 years.