The Problems with Money 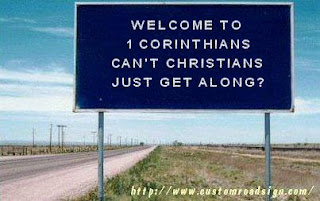 Today's first reading offers a glimpse into what may be at the heart of most of the problems in Corinth -- some of the church members are, or have become, rich.  And the people with money are convinced that their money proves their intelligence and their good morals.  (In some ways, this is a form of the 'other' Golden Rule -- he who has the gold makes the rules.)


The second reading provides insight into Paul's own conflicted motivations for writing to the congregation in Corinth.  While he offers lessons and insights that grow out of his faith and theology, many of Paul's comments come more from his own personal views.  In fact, some issues seem to touch raw spots in Paul's psyche -- especially issues about money and women.  In this reading, Paul is rather passive aggressive in wondering why the wealthy Corinthians don't support his ministry more.  Despite his statements to the contrary, it seems that Paul cannot quite understand why these new Christians should get wealthy while he, a very hard-working and long-suffering preacher and teacher of the gospel, is poor.

Elsewhere in this letter (and sometimes in other letters), Paul also shows that he is quite touchy about the subject of women.  Frequently, he harshly comments on the proper place for women and prefers them to stay silent in worship and church affairs.  (This is odd, given that elsewhere he praises women who are leaders in other congregations, like Rome.)  And Paul is particularly tough on marriage; in this letter, Paul suggests that abstaining from marriage is the highest form of Christian faith.  The tone is defensive and seems like rationalization, which strongly suggests that Paul desperately wanted to be married, but never was.  So while Paul tried to be a teacher in his letters, sometimes he betrayed is own emotions on issues that hit too close to home.


If you are planning to read the Bible in its entirety, you should read 1 Corinthians 5-7 today.