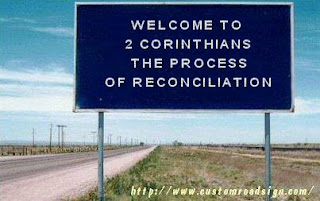 Today's first reading is a letter for an early church stewardship campaign.  (There seem to be two such letters, preserved back to back, in 2 Corinthians,)  It is an abrupt change of tone from the previous chapters, where Paul is hoping for a reconciliation.  Here, he is unabashedly asking for money to support his ongoing church planting.

Even more, given that several Christians in Corinth seem to have money, Paul is asking them to be as generous in their giving -- relatively speaking -- as other poorer Christians have been.  Not only would this be a great windfall for Paul's ministry, but it also encourages the Corinthians to "put their money where their mouths are" -- not only should they give something, but they should give enough that it is an actual sacrifice for them because only at this point can they fathom the completely sacrificial giving of Jesus.


The second reading is the beginning of the final section of 2 Corinthians, which likely was itself part of a separate letter to the Corinthians.  In it, Paul defends his ministry at Corinth, using writing that is sometimes theological and sometimes deeply personal.  When the disagreements between Paul and Corinthian church leaders arose, Paul was obviously hurt, even to the point of feeling betrayed.

He offered four main points to justify how he had approached and taught the Corinthian Christians, in comparison to the leaders/teachers that they preferred after him.  Here, he insists that good teaching can be identified by what it promotes.  Some teachers are mostly interested in promoting themselves; others are more worried about promoting their subject.  For Christian teachers, the most important thing is how they share the Gospel and help people claim it for their lives.  (The implication, then, is that the other teachers were more interested in promoting their own fame -- and getting people to pay them.  This is a central dilemma of Christian ministry -- it is valuable and should be financially supported; however, money cannot be the main reason why people serve in Christ's name.)


If you are planning to read the Bible in its entirety, you should read 2 Corinthians 8-10 today.