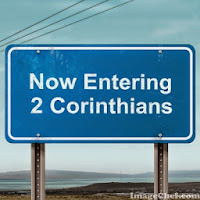 2 Corinthians is the second of two letters written by Paul to the church in Corinth, a city in ancient Greece.  It seems to be part of a long correspondence that Paul maintained with the Corinthian church after he traveled to establish churches in other cities.

As such, much of the letter deals with themes of forgiveness and reasons to accept people, despite their mistakes.  The best example of this is through God's forgiveness of humans through the teaching and sacrifice of Jesus Christ.  If God can forgive sinners, we should be able to forgive others for their mistakes.

This forgiveness does not mean that people can keep doing what they are doing.  Instead, they need to become better and more faithful Christians every day.  This means that they need to recognize good Christian teaching and follow it.  This can be uncomfortable, though, because such teaching will identify bad behavior and work to correct it -- which is exactly what Paul is trying to do throughout the letter.

One more word about the idea that there are several letters within 2 Corinthians.  The presence of multiple letters can explain why 2 Corinthians feels a little disjointed.  It begins with Paul trying to gain reconciliation with the church in Corinth.  Then it seems that the relationship has been restored -- so much so that Paul asks for money to support his ministry in other churches (in what seem to be two distinct fundraising letters).  Then the tone suddenly shifts, and it seems that Paul believes the relationship is much worse (and he becomes more defensive about his ministry).  One very easy explanation is that there are different letters here, sent over a period of time, and they seem to be a little out of order.