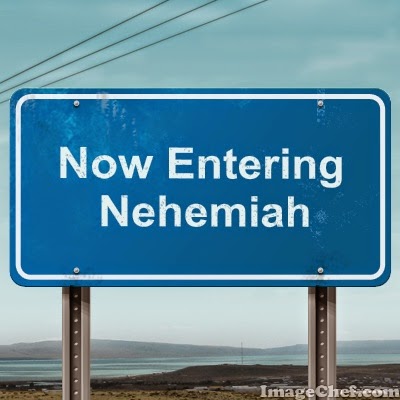 The history of Nehemiah parallels the history of Ezra.  While Ezra focuses mostly on religious matters and the rebuilding of the Temple, Nehemiah focuses on political matters and the rebuilding of the wall around Jerusalem -- which is a military necessity to preserve some semblance of self-government and self-control, even as a part of a larger empire.

Nehemiah has achieved a position of some influence in the court of King Artaxerxes -- he is the chief cupbearer.  Evidently, the king favors Nehemiah, and when the servant asks to go to Jerusalem and rebuild the city's wall, Artaxerxes gives his approval.  In fact, Nehemiah is ultimately appointed governor of the Jerusalem district.

Nehemiah believes that local political self-control is directly related to faithfulness, and he uses his authority to support the reforms made by Ezra.  In addition, he also helps the people become more self-sufficient by causing the wealthy to forgive excessive debts, which had caused several families to lose their farms and vineyards.

The reform movement was imperfect.  After Nehemiah travels to the court of Artaxerxes, he discovers that the people are not meeting religious expectations.  So he finds ways to compel the people to keep the sabbath, give their tithes, and stop marrying foreigners (that huge "no-no" for Ezra).