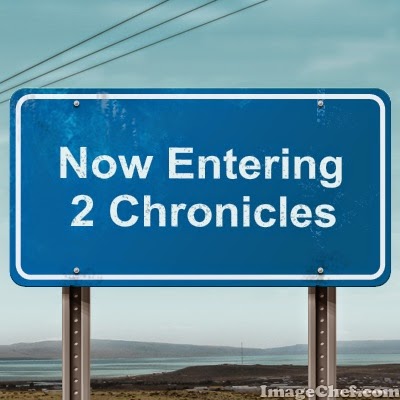 The retelling of the Jewish monarchy continues in 2 Chronicles, focusing on the years between Solomon and the fall of Judah.  However, there are a couple of key differences in Chronicles.

Second, Chronicles believes that the mark of a faithful king can be directly seen in how the king supports proper worship in the Temple.  Those rulers who support the priests and who themselves worship properly in the Temple are good; those who do not are considered bad and unfaithful kings.  In a couple of instances, a king is good for the years that he supports the Temple, but bad when he does not.

The importance of the Temple is mostly implicit, but it is highlighted when the priest Jehoiada maneuvers to save the monarchy in Judah from treacherous influences of the northern kingdom -- who evidently conspired to assassinate the entire royal line except for those who would serve as proxies for the interests of the northern kingdom.

And it is the Temple that gives hope even after the fall of the kingdom.  The promise at the very end of 2 Chronicles is not that the monarchy will be restored... but that the Temple will be rebuilt.