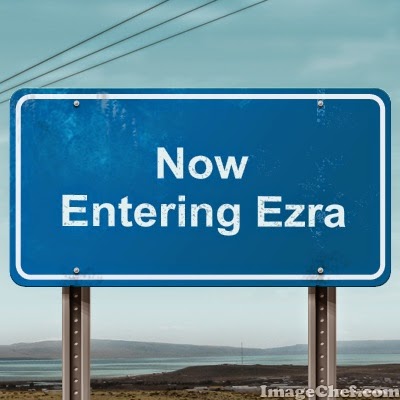 After 70 years in exile, the Jews are given their freedom.  The Persians defeat the Babylonians, and their king, Cyrus, declared that the Jews were free to return to their homeland.  Even more, he offered financial support for them to rebuild the Temple.

Ezra tells the story of the years of return.  Immediately upon reaching Jerusalem, the first returning exiles resumed their religious practices by building an altar and offering sacrifices.  Soon, they laid the foundation for a second Temple.  However, the actual construction of the Temple was delayed after Cyrus' death.  The building of the Temple resumed and was completed under the Persian leader Darius.

The story in Ezra is not entirely a happy story.  One group of exiles returned under the leadership of Ezra, one of the foremost priests.  Ezra discovers that some of those returning to the holy land are continuing practices from exile -- including marrying local women who are not Jews.  Ezra is appalled by these marriages to "foreigners" (as they are described in the book), and he is terribly afraid that God will punish all of the people with another exile -- or worse -- because of them.  So he instructs the people to stop the practice and to atone for those who had already married these non-Jewish women.  As the book ends, the non-Jewish wives and their children are sent away, purifying the people returning to the Promised Land.