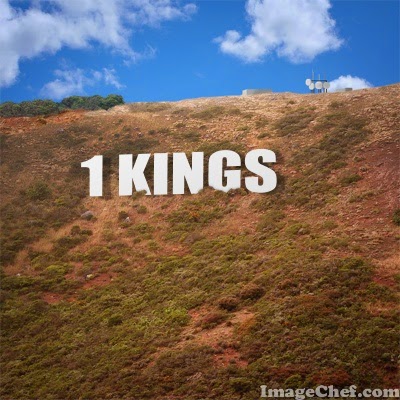 On Sunday, Rev. Joshua Patty preached about the history of Israel after the death of King David.  David's first successor, his son Solomon, was a hugely successful king who continued his father's legacy and constructed his father's dream project -- the Temple in Jerusalem.  At its dedication, Solomon asked God that it might be a focal point for faith, even though no house could contain God, especially when the people lost their way and needed to return to God.

After Solomon's death, however, faith takes a back seat to blunt politics as the kingdom is divided into two -- the northern kingdom of Israel and the southern kingdom of Judah.  Israel tries to build a new religious center at Shechem, but it is not as lasting as the Temple in Jerusalem, Judah's capital.  Then again, religious faith seems to be a decreasing priority, and the people seem to be attracted to worshiping foreign gods, especially Baal.

When the kings can no longer be trusted to offer good moral leadership, God calls powerful prophets to get the people's attention and urge them to return to faith in God.  The most famous of these in 1 Kings is Elijah, who famously battled the prophets of Baal during the reign of the despicable monarchs Ahab and Jezebel.

The Temple, for its limitations, offered an identifiable place for people to forcus on and return to God -- something the people of the northern kingdom of Israel lacked because their unity was strongly based on a shared frustration with the influence given to the tribe of Judah in Jerusalem.  Eventually, this would allow the people of Judah to survive even their conquest by Babylon, while the people of the northern kingdom would be conquered, scattered, and lost to history.

You can also listen to the related Communion meditation.
Posted by Joshua Patty at 2:48 PM