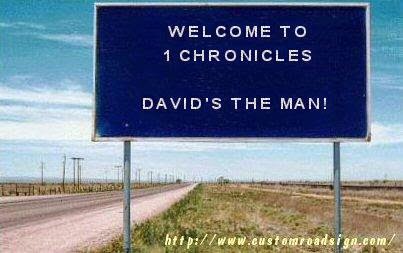 Today's first reading tells how David ordered a census of the kingdom to be taken (likely for tax purposes or to conscript people into the army).  Such actions betray a lack of faith throughout the scriptures, and David swiftly incurred God's wrath.  David retreats, dons sackcloth, and begged God's forgiveness.  While doing this, David saw an angel of destruction sent by God; this angel instructed David to build an altar on the threshing floor of Ornan.  This also will be chosen as the location for the Temple.


Today's second reading describes how David attempted to micromanage the construction of the Temple.  While following God's command not to build the Temple, David drew up the plans and gave instructions for where and how the Temple would be constructed.  First, David offered explicit instructions to Solomon, the son who would succeed him on the throne.

If you are planning to read the Bible in its entirety, you should read 1 Chronicles 17-22 today.