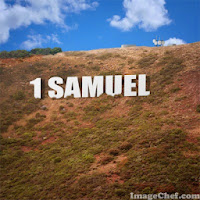 On Sunday, Rev. Joshua Patty preached about the establishment of the Jewish monarchy, which is the main story of 1 Samuel.  This history focuses on the priest, Samuel, who would assent to the people's demand for a king, and the man he anointed, Saul -- a man who was tall, handsome, and a mighty warrior.

When the people demand a king, God responds (through Samuel) that this is a bad idea.  While a king might offer more consolidated power and a clear line of succession, the king will also place huge demands on the people.  However, God accepts the Israelites' request, and directs Samuel to Saul.

Initially, Saul seems a good choice, leading faithfully and wisely.  After some success, though, Saul reveals a dual problem.  First, he starts to behave as if he is a god due to his royal authority and power; second, he becomes paranoid that others will take away his power.  In fact, he is especially concerned about David, the shepherd boy who defeats the Philistine giant Goliath, which leads to some erratic behavior on Saul's part over the last years of his life.

In some ways, 1 Samuel tells a two-part story about God's interaction with the Israelites.  First, God tries to dissuade the people from choosing the wrong way of life, but allows them the freedom to crown a king.  Despite recognizing that this is a bad idea, God then tries to put the right people in place for the monarchy.  In the case of 1 Samuel, the main examples of this are Samuel, Saul, and David.  One imagines that God looks at our modern life in a similar way.  To be sure, we live under a system that God did not design -- humans did -- so it has flaws.  However, God tries to help us to live as well as we can under this system.

You can also listen to the Communion meditation and the closing benediction.