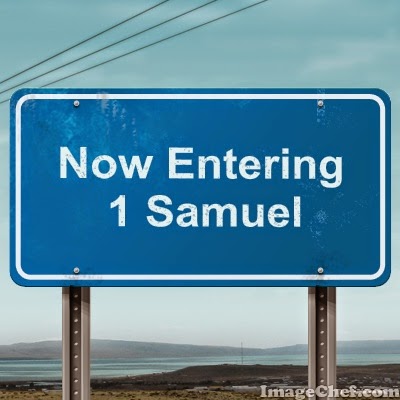 After the time of the judges, the people looked for warrior kings who could lead the Israelites against their enemies, especially the Philistines.  The last of the judges, the prophet Samuel, gives name to the first history of the Jewish monarchy.  It is Samuel who will anoint the first two kings of Israel: Saul and David.

This change in leadership is not without foreboding, as it signals a lack of faith in God to provide protection.  Still, God accepts the Hebrews' passionate request for a king, and selects Saul, a man who literally stands head and shoulders above most of the other men of Israel.  Saul proves to be a willing fighter, but an impetuous leader.  As often as he leads the Israelites to victory, he becomes paranoid to threats everywhere -- some real, but some mostly figments of his imagination.

So God directs Samuel to anoint another king, the boy David who will become famous for his slingshot in a battle against the giant Philistine Goliath.  David's entry into the halls of power, though, makes the last half of this book read like a soap opera, filled with court intrigue and political maneuvering.  Saul tries again and again to neutralize David's growing prestige, but grows increasingly desperate as his attempts seem only to increase David's reputation.  In the end, Saul meets an ignoble end and the way is cleared for David to become king.