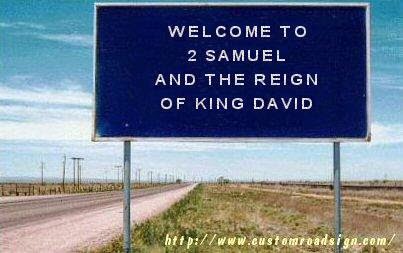 Today's reading tells the embarrassing story of David and Bathsheba.  After seeing the beautiful woman bathing on the roof -- at a time when David probably should have been away with the army -- he decides that he must have her.  Finding that she is married, he first tries to have her husband return (as a way to explain any pregnancy), but Bathsheba's husband Uriah refuses to visit with his wife when other army men cannot be with their wives.  So David plots for Uriah to be killed in battle, allowing him to marry the widow Bathsheba.  God, not surprisingly, is appalled by David's behavior and punishes him.  However, David begs God for mercy, and God partially relents, allowing the marriage.  The second child of David and Bathsheba was Solomon, who will ultimately succeed David as king.

If you are planning to read the Bible in its entirety, you should read 2 Samuel 11-15 today.