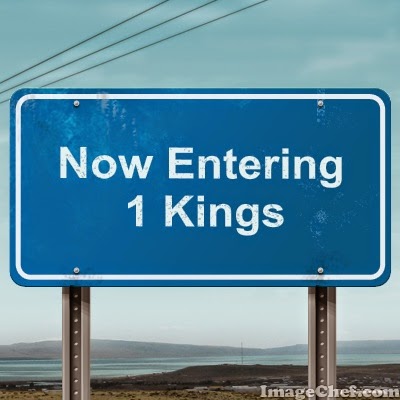 After the death of King David, there is a brief power struggle before Solomon consolidates power and the undisputed king of Israel.  Not only does Solomon follow his father's example as a military leader, but he fulfills his father's greatest dream, the construction of the Temple in Jerusalem.  The enormous and ornate project took seven years to complete.

Solomon was evidently a very prestigious king in the region, well-known for his wisdom and his wealth.  Also, the Jewish kingdom was at its most powerful -- and controlled the most territory -- under Solomon.

However, the years following Solomon's reign tell a story of decline.  Bitter animosities between Jewish factions cause the Jewish kingdom to split into two kingdoms -- the northern kingdom, which kept the name Israel; and the Southern kingdom, which took the name Judah and whose capital was Jerusalem (the city of David and the home of the Temple).

Much of the focus of the later chapters in 1 Kings describes the succession of unfaithful kings of Israel, who led the people astray.  This decline culminated in the reign of King Ahab and Queen Jezebel, two of the most despicable figures in Jewish history.  Against them was a powerful prophet who spoke for God against their abuses of power and their false faith -- the legendary Elijah.