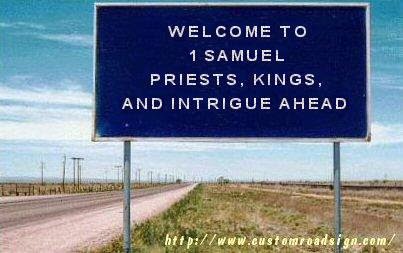 Today's first reading introduces the first king of Israel, Saul.  He is anointed by the revered priest Samuel and introduced to the people as the king God has chosen for them when they cried out for a king.


The second selection tells how Saul quickly lost God's favor with his impatience and, ultimately, lack of faith.  With a battle against the Philistines looming, Saul waits for Samuel to arrive to offer a sacrifice, asking for God's blessing in battle.  But Samuel does not arrive when he should, so Saul offers the sacrifice himself, likely because he was afraid that the Philistine army might attack before Samuel would arrive.  Although Saul would continue to be king, and would even lead Israel to military victories, this opened the door for another king to be chosen by God.

If you are planning to read the Bible in its entirety, you should read 1 Samuel 8-13 today.