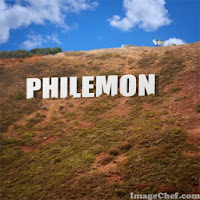 On Sunday, Rev. Joshua Patty preached on the letter to Philemon, a personal letter in which Paul tries to explain the value of each and every person in the church.

Paul does this by considering the case of a runaway slave, who belonged to Philemon, an active Christian.  This slave had somehow been in a position to help Paul while he was imprisoned.  Paul helped this slave become a Christian and then adopted him as a son.  He gave him a new name, Onesimus, which means, "useful."  Then he sent him back to his master with this letter, encouraging Philemon to welcome the slave back, not merely as a slave but as his brother in Christ.

Such a vision of Christian equality has been a challenge for 2000 years.  Early Christians had difficulties understanding the value of women and slaves in the church.  Wealthier Christians have long had much more influence in the church than poorer Christians.  Even today, there are certain types of people that we eagerly want to be in our congregation, while there are others that we secretly hope will join other churches.

Paul's message to Philemon and to the church as a whole (through this letter which was likely intended to be read publicly by other Christians) is that each Christian is beneficial and important to the church.  Each Christian, whatever their legal status, gender, education, economic class, etc., should not merely be tolerated, but celebrated.  For this, Paul put his own reputation on the line, claiming a runaway slave to be his own son.