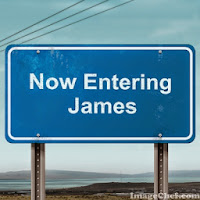 James is a letter that is traditionally attributed to the younger brother of Jesus.  Whether this is true or not, it clearly has a different feel from the letters attributed to Paul, which often insist on clarifying and defending proper Christian teaching and belief.

Instead, James suggests that Christian faith is not based on stating beliefs, but rather on acting upon those beliefs.  It is one thing to say what you believe; it is quite another to live in ways that others can see what you believe.

In this letter, James identifies some ways that Christians often preach a better game than they live.  These are related to wisdom, to preferential treatment of certain people around us, to handling temptation and suffering, and to issues of whether Christians actually trust God as much as they say they trust God.  In each case, James offers practical advice on how to fix these common shortcomings of faith.

More than many New Testament letters, James deals with issues that are still present in the modern church.  So perhaps more than other parts of the New Testament, this should be essential reading for Christians, offering practical ways to strengthen our faith and more clearly recognize God's true wisdom.