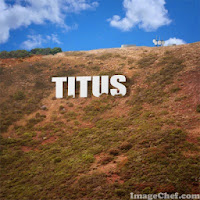 On Sunday, Rev. Joshua Patty preached on the letter to Titus, the third of the so-called pastoral epistles that between Paul and those who followed him as ministers.  In some ways, it covers some of the same issues as 1 Timothy, providing instructions on how to select congregational leaders.

In some ways, though, Titus encourages the church to look more like the surrounding culture -- at least the good parts of it. Christians should make attempts to behave like their non-Christian neighbors and co-workers.  Partially, this was probably an attempt to help people see Christians not as a crazy sect of weirdos, but as virtuous and faithful people.  If successful, this would probably decrease persecution and increase the number of people willing to become Christians.

More than this, though, there is also a belief that the good values of the surrounding culture can help develop Christian virtues and Christian values will help develop social virtues that will be appreciated by others.  Even in our own time, we frequently act in this way.  We expect that Christian behavior will be influenced by good habits and lessons taught outside of the church, and we hope that Christian teaching will encourage still other good behavior in peoples' daily lives.


You can also listen to the related Communion meditation.