Everyone Is Useful in God's Household 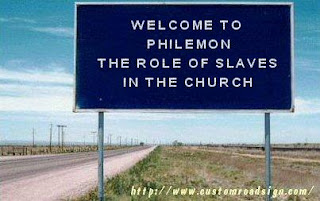 Today's reading is the short and brilliant letter of Paul to Philemon.  This letter tackles a huge problem in the early church with both tact and firmness.  Slaves were a matter of life in the Roman empire, and slaves quickly became a part of some early congregations in cities throughout the empire.  Christian teaching suggested that all people were equal in God's eyes; in law and custom, though, slaves were not equal to others.

Paul puts his own prestige on the line for a runaway slave that he calls Onesimus, which literally means "Useful."  He obliquely uses the language of adoption, claiming the slave as his own son, but then encourages the slave to return to his master, Philemon, who is a Christian and friend of Paul.  Emphasizing the teaching of love and gratitude, Paul hopes that Philemon will welcome the slave back and, even more, expects that he will treat Onesimus as his brother in Christ.


If you are planning to read the Bible in its entirety, you should read Philemon 1 today.