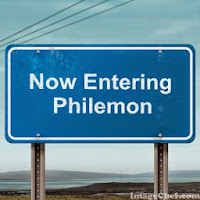 Philemon is a powerful letter by Paul addressing a key issue in the life of the early church -- the role of slaves (if any) in a congregation.  The great apostle addresses this issue by example, writing a letter to his fellow Christian, Philemon.

Evidently, one of Philemon's slaves had run away and ended up in the care of Paul.  While with Paul, the slave becomes a Christian and evidently is quite helpful to the evangelist while he is imprisoned.  Paul recognizes this by adopting the slave with a new name, Onesimus, which means useful.  Then, Paul sends the slave back to Philemon with this letter.  He expects that Philemon will forgive Onesimus for running away and -- here's the even more challenging piece -- accept him as an equal brother in Christ.  (Ultimately, Paul may hope that Philemon will release the slave to return to Paul's side -- there are suggestions of that in this short letter too.)

The implication is clear, though.  Slaves have a place in Christ's church.  They do not rank below other Christians, but rather are equal brothers and sisters to everyone else in Christ's name.  And... and... if Christians can treat others with love and gratitude for everyone's usefulness -- what Paul describes metaphorically elsewhere as everyone's particular part of the body -- they will celebrate this and live it out.  (Unfortunately, the church has a long, complicated history with the issue of unequal treatment of Christians based on their social and economic status.)