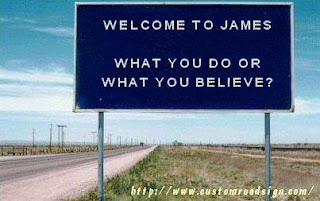 Today's reading provides a startling example of how Christians (throughout history) have often failed to live out through actions what they say they believe.  While they often repeat Christ's teaching to love their neighbors as themselves, they just as often show preferences for dealing with certain people.  In this example, it is a preference for associating with the rich instead of the poor, but there are many other ways that Christians fall into this trap, which is the opposite of faith.

James then provides his central theme -- faith without works of faith is not faith at all.  What Christians say they believe must be carried out through action, such as caring for the poor.  James offers a couple of examples from the Hebrew scriptures -- Abraham not only believed, but lived out his belief when he was willing to sacrifice his son Isaac; Rahab not only believed, but sheltered and protected the Jewish spies.


If you are planning to read the Bible in its entirety, you should read James 2 today.