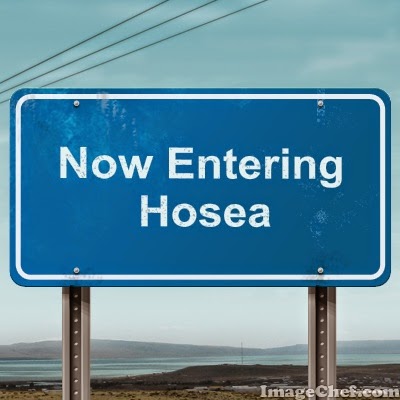 Hosea was a prophet who lived in the northern kingdom of Israel before its defeat and capture (which happened decades before Babylon defeated the southern kingdom of Judah).  Drawing from personal experience of having married a woman who cheated on him, Hosea offers the words of a loving God whose love has been repeatedly rejected.

The northern kingdom of Israel, soon after it established its independence from Judah, was evidently quite tolerant of the worship of several gods.  While there were holy places to worship God (notably at Shechem), people began building altars and pillars to worship other gods, the most famous of which was Baal.  Hosea likens this behavior to a woman who cheats on her husband.  God responds as a man would to a cheating woman -- distrusting, separating from, and seeking a just settlement (though justice her takes the form of punishment, rather than a financial agreement).

Ironically, Israel has begun to sense that there may be trouble ahead, as foreign armies threaten to invade.  So they have tried to curry favor with the gods by worshiping more, including by praying and sacrificing more to the true God.  However, this behavior only seems to further prove the problem that Israel cannot and will not trust in God alone.  So they cannot stop the coming defeat.  However, God still loves this people, and promises a day when the loving relationship will be reconciled.