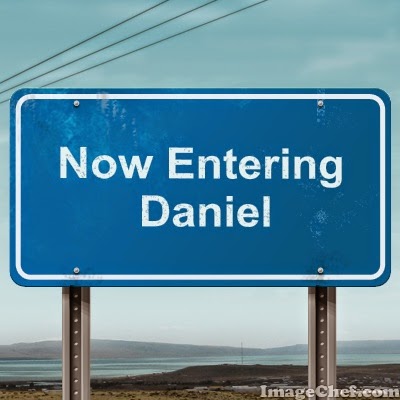 Daniel was one of four Jewish exiles in Babylon who were invited to become royal advisers by the king.  Although it is not clear why they were chosen, they display certain remarkable qualities.  They are quite faithful and they are brave enough to practice their faith in the face of punishment by the Babylonians -- even death.  And Daniel himself has the ability to interpret dreams and signs, which leads him to directly advising several Babylonian kings.

The opening chapters feature the most famous Babylonian king, Nebuchadnezzar, who captured Jerusalem, looted the Temple, and carried Jewish leaders into exile.  In these pages, he comes across as an egomaniac, demanding grandiose -- and sometimes impossible -- actions, usually under penalty of death.  Despite this, the four faithful Jewish advisers survive, and Daniel rises to a position of significant power and influence.

Famously, the four also survive certain-death experiences.  Three men -- Shadrach, Meshach, and Abednego -- are tossed into a fiery furnace, but emerge unscathed.  Daniel was famously cast into a den of lions, but emerged the next morning untouched.  The later visions of Daniel prove that their experience will likely be faced by all of those who remain faithful to God.

The overriding theme of the stories and visions of Daniel is that things are going to get much worse before they get better.  There are prophecies of one kingdom conquering another kingdom, only to be conquered itself.  All of this war creates a chaotic situation, filled with uncertainty and danger for everyone, not merely those faithful to God.

The consistent promise in Daniel, though, is that God will ultimately defeat all of these foreign kingdoms and establish a peaceful kingdom in place of war and chaos for the faithful.  Indeed, in the final vision, there is a promise of a second life in that peaceful kingdom for the faithful who are persecuted and die during the turbulent times ahead.