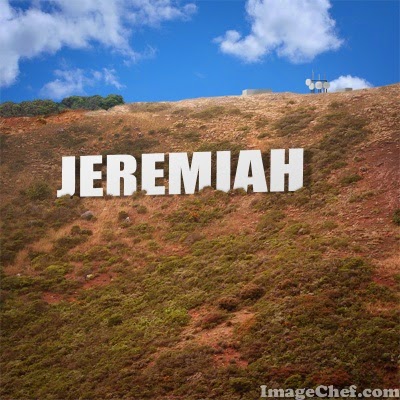 On Sunday, Rev. Joshua Patty preached about Jeremiah, the prophet who had the unpleasant task of explaining God's seeming harsh treatment of the Jews.  In particular, Jeremiah related that the defeat of the Jews and exile into Babylon was an unavoidable punishment from God for idolatry.

Jeremiah can be tough to listen to, as he must have been when he was sharing these prophecies during his lifetime.  In fact, he evidently was threatened by people who tired of his "gloom and doom" -- once even abandoned in a cistern and left for dead.  Underneath his persistent words of punishment and destruction, though, is a consistent hope from God that there will be better days for God's chosen people in the future.

Unfortunately, this better future would not come easily.  The bad behavior and poor decisions made by the Jews, especially their worship of false gods, was not easy to change.  Their divided loyalties betrayed a lack of faith in the true God and probably a complete misunderstanding of the nature of faith.  The Jews thought that as long as they continued the worship rituals in the Temple on the appointed days, God would be satisfied.  This behavior has gotten so bad that the only way for God to change it was to remove the Jews from the holy land and from the Temple, give them time to rediscover true faith, and then start again with a later group of them.

The unavoidable problem, it seems, was the self-delusion of the people.  They thought they had it all together, and that they had all the answers, but they were wrong.  And their self-deception was so complete, God was not able to painlessly correct it.  Instead, the correction would be very painful indeed.  Sometimes, perhaps, we Christians should ask ourselves -- seriously ask ourselves -- if we are similarly deluding ourselves about our faith in God.