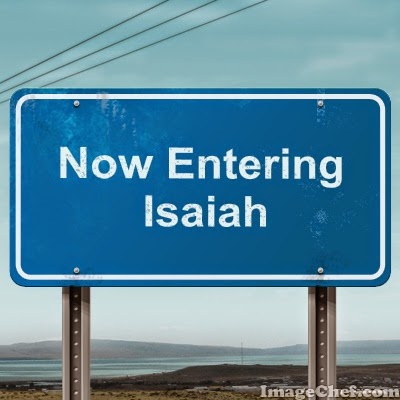 Isaiah is the first of the long concluding section of the Hebrew Bible, which is a collection of 17 prophets.  Overall, they were probably written over a period of 400 years, but they are not in chronological order.  Some are written during the period when the Israelite kingdoms are in decline; others during the Babylonian exile.  (The later part of Daniel likely was written long after the return from exile.)

Isaiah is a particularly challenging case because there seem to be a collection of prophecies here from both the kingdom period and the time of exile.  Historically, Isaiah was a court prophet for several Jewish kings, most notably Hezekiah.  This was a time of decline for Judah, threatened by foreign armies many times.  It also was a time of renewed emphasis on faith and proper understanding of Torah.  The first section (chapters 1-39) seems to date from this period.  There is a sharp shift beginning in chapter 40, which seems to speak directly to a people in exile.  (Some scholars think there is another shift in chapter 56 to the time after the exile.)

Understanding the changing contexts can help to understand some of the images and promises recorded in these prophecies of Isaiah.  However, there is a strong thematic consistency throughout the 66 chapters, regardless of whether the words preserved in Isaiah are the work of one or more prophets.  God's people have turned away from God too long and now God will judge the people on their righteousness according to the law and their sense of justice.  In both cases, the nation as a whole is so guilty that it must be severely punished.

Frequently, the judgment promised is destructive -- foreign armies will defeat the Jewish government and dominate the people.  This judgment is not merely to punish, though.  God hopes that it will purify the people to allow them to reclaim their identity as God's chosen people in a restored kingdom -- one which will be marked by strength, security, and peace, and one that will be established by a special leader chosen by God to reclaim David's throne.  A new generation will inherit the promise God made to Abraham and inhabit a restored Jerusalem.