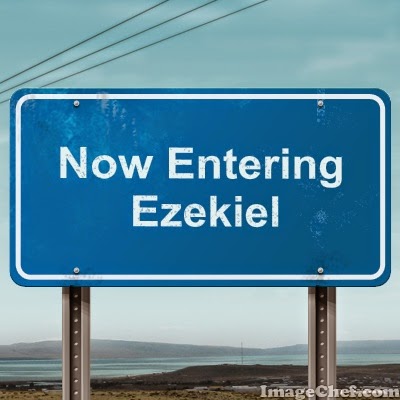 Ezekiel was a priest chosen by God to be a prophet during the time when Jews were exiled in Babylon.  At the beginning of the exile, some Jews remained in Jerusalem; however, after another rebellion, the Babylonians returned and completely destroyed the city and the Temple.

This historical fact is important because there are two main audiences for the prophecies of Ezekiel: first, those remaining in and around Jerusalem and, second, those in exile.  To the first group, Ezekiel has increasingly awful news.  Due to generations of faithlessness, especially the worship of idols, God has completely lost faith with the people in Jerusalem.  In fact, God's presence has left the city, which means that it will be defenseless against a future attack.

However, God still believes that there are a few who can learn to be faithful.  So, to the second group, Ezekiel offers prophecies of punishment and hope.  Those in exile need to understand why God is unhappy and why they deserve this punishment.  However, they also need to understand that God's people will again live freely in the Holy Land.  Like seeds, God will take faithful people from exile and "plant" them in Jerusalem, where they will grow in numbers and restore Israel.

Some of Ezekiel's prophecies are highlighted by dramatic visions -- of angels, wheels in the sky, and bones that rise from graves and become living human beings again.  The final vision (which lasts for the final 9 chapters of Ezekiel) is of the new Temple that will be built in the restored Jerusalem.  It also contains a powerful promise -- God's presence will dwell in the rebuilt Temple.