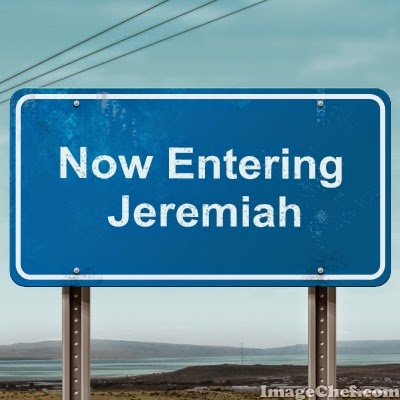 Jeremiah is the second prophet.  Unlike Isaiah -- so often quoted by Christians for prophecies thought to describe Jesus -- Jeremiah offers much more punishment than hope (though both themes are present).  The hard edge of Jeremiah's prophecies is understandable, though, given their context: they were given in a period of time spanning the Babylonian conquest of Jerusalem and the exile of Jewish leaders into Babylon.

For people wondering why God had turned against the chosen people, Jeremiah offers a clear explanation.  The imminent defeat is punishment for the widespread worship of foreign gods and idols -- so widespread that it seems to have been present among the royal courts, the prophets, and even the Temple priests.  Amid the talk of destruction, though, Jeremiah quietly corrects one misunderstanding -- the defeat of the Jews will be harsh, but it is not meant to destroy them.  Instead, through this punishment, God hopes to remold the chosen people into a nation that once again will worship God alone and be worthy of independence and God's favor.

In fact, it turns out that those who seem totally defeated -- those who are carried off into exile in Babylon -- are will be the remnant saved by God.  In fact, Jeremiah famously writes to the exiles (the prophet evidently remained in Jerusalem after it was first defeated) and instructs them to live full lives in Babylon -- to marry, to have children, and even to obey the Babylonian rulers.  Those who are not carried into exile -- again, a group which evidently includes Jeremiah himself -- will be utterly destroyed by the invading Babylonians.   Only after 70 years will God replant the chosen people, using Jews returning from exile in Babylon.