Lament for a Defeat Allowed by God 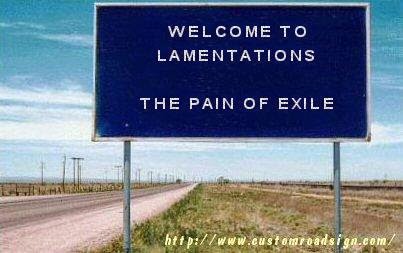 Today's reading introduces us to the book of Lamentations, a poem that explores the deep spiritual pain experienced by the Jews at their defeat and exile by Babylon.  At the beginning, it imagines the capture of Jerusalem from the point of view of the city, whose streets are now empty, as the main leaders of the city have been killed, taken into captivity, or scattered.

There are lots of interesting implications in the opening verses.  Lamentations is either written during the brief period between the first capture of Jerusalem and its final destruction, or it is an imagining of the holy city by those in exile in Babylon who do not know -- or do not wish to believe -- that God's holy city has been destroyed.  More important than this, though, is the clear understanding that the destruction and exile has been allowed by God as a righteous punishment for the past mistakes of God's chosen people.

If you are planning to read the Bible in its entirety, you should read Lamentations 1 today.