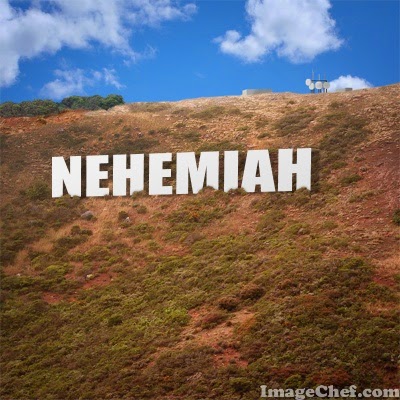 On Sunday, Rev. Joshua Patty preached about the Jews returning from exile in Babylon and their ongoing struggles to remain faithful.  Like Ezra, the story begins with a building project -- in Nehemiah, the Jews are allowed to rebuild the wall protecting the city of Jerusalem.  Nehemiah, the Jewish servant of the Persian king who was appointed governor of Jerusalem, faced as many political challenges as religious ones.

Just as in Ezra, there were foreigners who tried to stymie the project by suggesting to the Persians that they should not trust the Jews to remain peaceful subjects.  However, there was also internal unrest because of economic problems (caused by a severe famine) that led some Jews to become heavily indebted to others.

Nehemiah capably dealt with both problems.  He convinced the Persians that the Jews did not pose a threat to rebel.  He encouraged wealthy Jews to forgive debts in order to increase unity.  And Nehemiah led by example; he refused to live lavishly as the political leader of Jerusalem.

Things seemed to be going well enough that Nehemiah returned to Persia.  After his visit, though, he was frustrated by what he found had happened in Jerusalem during his absence.  There were significant numbers of people who were not following Torah.  They were working on the Sabbath.  They were failing to financially support the Temple and its priests and workers.  They were not all keeping the religious festivals and holidays.  They were marrying non-Jews and accepting their foreign gods.

In some ways, this is an old story.  The bad habits that were learned in Babylon over 70 years were difficult to "unlearn" in Jerusalem.  But the story is bigger than that because this is the final chapter of Jewish history in the scriptures (the book of Esther precedes this story chronologically).  For centuries, Jews have asked why God did not allow them again to be a fully independent and free people.  For centuries, the most common answer has been the one that Nehemiah suggested upon seeing this unfaithfulness -- the Jewish people were squandering their second chance with God.

(Of course, this "why?" will be debated for centuries, frequently relying on the writings of the prophets, and some other answers -- including that of Jesus of Nazareth and his followers -- shaped the way the Christians understand faith.)

You can also listen to the closing benediction.