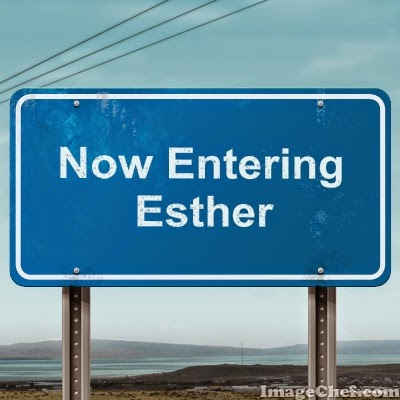 The namesake of Esther is a beautiful Jewish woman who gained the eye and favor of the Persian emperor and rose to become queen.  This takes place in the generation before Ezra and Nehemiah, while the Jews are still in exile.

During this time, they faced the threat of extermination from those who felt their customs and faith posed a threat to the legal order and cultural norms.  Esther tells how a woman and her uncle gained the ear of the king and were able to prevent this from happening.

In generations since, Jews have celebrated the salvation of this story and the influence of Queen Esther during a festival known as purim.  While the celebrations are usually quite joyful, there are dark sides to this story.  Esther is a heroine, but she only has the opportunity to influence the king's actions because she is a beautiful woman added to the royal harem who somehow distinguished herself in the king's eyes from the other women.  (In some ways, the story does Esther no favors -- she also seems more a pawn of her uncle Mordacai than a wise woman on her own behalf.)  Worse, at the story's end, the Jews kill 75,000 of those who threatened them -- an unexpectedly violent twist.

While the story focuses on four main people: Esther, her uncle Mordacai, King Ahasuerus, and the evil Haman, it is meant to represent a more pervasive threat against the Jews while they were in exile.  Haman may be evil incarnate, but he represents others in the empire who wanted the Jews destroyed.  Mordacai and Esther also represent the Jewish attempts to preserve their identity -- and their very lives -- while in exile.