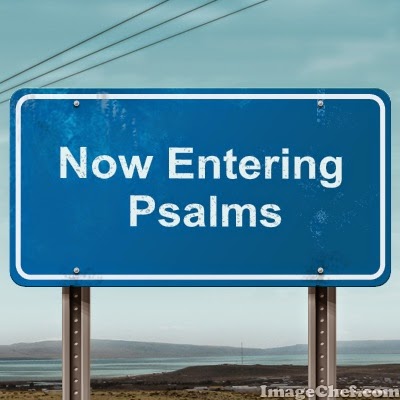 Psalms is a collection of songs and poetic prayers, many of which are attributed to King David (who not only was a mighty warrior, but as a boy would play the lyre and sing for King Saul, to soothe his soul).  In some ways, it is like having a hymnal in the middle of the Bible.  Most of the psalms were sung during Biblical times; many of them have been set to music and sung in synagogues and churches in the centuries since they were written.

Taken together, these songs provide a broad attempt to describe the nature of God and of God's relationship with creation, especially human beings.  Many of the psalms describe why God should be worshiped and praised; others offer deeply heartfelt prayers to God -- prayers for mercy, deliverance, and hope.

Some of the psalms are happy and optimistic, but most recognize that even the faithful face challenges in life.  Even for God's chosen people, there is suffering to be endured.  Worse, those who are enemies of God's people set traps for the faithful, which must be carefully avoided with God's guidance and teaching.  After all, people are imperfect and limited -- even the faithful.  All people need God's help and protection.  Throughout, the people believe that God never abandons them -- indeed, God is frequently praised for "steadfast love."

There are different types of psalms.  Some were written to be sung in worship, probably in the Temple.  15 are identified as "Songs of Ascents," which were songs that were sung by people as they approached the Temple.  Others were poems or prayers that were collected and then likely set to music so that they might be learned and remembered.  And there is much in the psalms to be remembered -- some of the most famous Bible verses are in the psalms (and have been set to music by modern composers for us to hear and remember).

** A note for people reading the entire Bible during Godsway 66.  There are 150 psalms, which works out to reading 30 each day this week.  That's a lot and can be overwhelming.  (It's the equivalent of listening to 3 full albums of music each day.)  Perhaps you might spread some of the psalms out over subsequent weeks.  This will allow you to savor each of them more.  This is a rich collection, and much of the beauty will be lost if the psalms are read in a hurry.  (Reading 30 psalms a day might be the equivalent of doing 75mph on the highway -- you'll get there fast, but you won't notice much along the way.)