General Roles in the Church, and Paid Staff 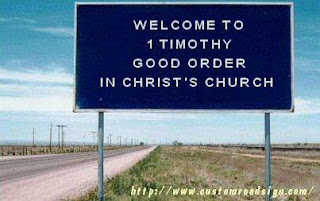 Today's reading offers general observations about the basic courtesies that should be given to others in the church, by age, by gender, and by whether they are legally slaves or not.

The longest section details the qualifications of widows in the church.  Such women were supported financially by the church so that they did not become destitute; the implication is that they performed certain duties for the congregation in return.  However, too many women seemed to hope for this support, so there are restrictions.  First, women who can be supported by their extended families after the death of their husbands should rely on them, rather than the congregation.  Second, women who are not old should marry again.  Mostly, this policy hoped to guide support to the women who needed it most, although their is an implication that younger women had caused problems in the church.

There also is a brief section on elders -- members of the presbytery -- who evidently received financial support for their work in the church.  Aside from those who were preaching and teaching elders, like Timothy, it is not clear what their responsibilities entailed; however, there is a concern that they receive their salaries, even when their actions rankle members (except when two or three witnesses can prove that the elder is in the wrong).


If you are planning to read the Bible in its entirety, you should read 1 Timothy 5:1-6:2 today.