Acts of the Apostles, Overview 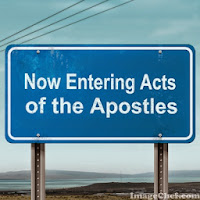 Acts of the Apostles, often simply called Acts, is a history of the early church. It was written as the companion book to the gospel of Luke.  Like Luke, it emphasizes the role and power of the Holy Spirit in guiding Christians and spreading the teaching of Jesus throughout the world.  The Holy Spirit even allows the disciples to offer miraculous cures, exorcisms, and even resurrections to others in Jesus' name.

While there are many important Christian leaders mentioned in Acts, two men stand out from the others.  The first is Simon Peter, who had been one of Jesus' first disciples.  Peter became the Christian leader in Jerusalem, often speaking for the other disciples (as on the day of Pentecost) or acting on their behalf.  The second is Paul (also called Saul in Acts).  While he never met Jesus before his crucifixion, after a dramatic vision of Christ on the road to Damascus, Paul became the most passionate teacher of Jesus.  Through his tireless travels, he planted and nurtured Christian communities throughout the Roman empire.  At the end of his life, Paul even preached in Rome.

Acts recognizes that many early Christians were persecuted for their beliefs; some of them even became martyrs.  Despite this opposition, though, the church grew exponentially in the early years, especially after the church affirmed that Christians did not have to convert to Judaism in order to become Christian.  This decision, at a council in Jerusalem, opened the door for Gentiles to more easily become Christians.  In a relatively short period of time, due to the faithful efforts of many, there were Christian communities throughout the known world, even in the Roman capital.