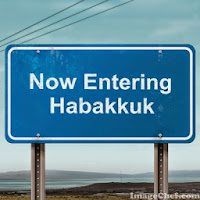 Habakkuk, another of the "minor prophets," prophesied as the Babylonian army approached Jerusalem, threatening to defeat the Jewish people.  The Babylonians are referred to by a tribal name -- the Chaldeans -- in the opening chapter (which can be confusing if you are not an expert on ancient near-East politics and history).

While the Babylonians did not completely decimate those they conquered (unlike the Assyrians who defeated the northern kingdom of Israel), they were still a powerful military empire who used the threat of overwhelming violence to gain easier victories.

Against this threat, Habakkuk offers two straightforward teachings.  First, the Babylonians will eventually reap what they sow -- the culture of violence and overwhelming pride in their military power will eventually unravel (and be defeated by others).  Second, God is a stronger source of protection and strength than the Babylonian army can imagine.