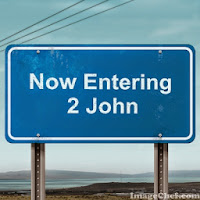 2 John is the second of three letters ascribed to John.  While much shorter than 1 John, it still includes similar themes and language.  The key commandment of Jesus is to love one another.  The key goal of faith is to abide in the teacher -- the truth -- of Christ.

As noted in other letters, there are teachers that are trying to go beyond this teaching in the church.  In particular for 2 John, there seem to be some that are questioning whether Jesus was actually a human being, or simply God taking the appearance of a man.  While this may seem unimportant, it has implications for how Jesus fulfills prophecy, if at all, and how to understand Jesus' death (if Jesus was only God, he never died).

Leaders of the church are warned to avoid such teachers.  They only offer the wisdom of the world instead of God's truth and love, which makes them the opposite of Jesus.  In this letter, such teachers are described as antichrists, and the are not to be welcomed in the church.

One additional thing is interesting about this letter.  It is written to an unnamed woman and her children.  Historically, this has been interpreted to be a reference to the church at large -- much like ships, the church has been referred to as "she"; however, this seems reading to be greatly influenced by patriarchal assumptions.  The more straightforward reading -- which would be corroborated by Romans 16 and Pliny's letter to Trajan about Christians -- is that some congregations in the early church were led by women, and this letter is to one (or some) of them.