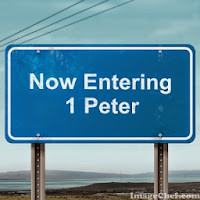 1 Peter is the first of two letters in the New Testament ascribed to the apostle Peter, the rock on whom Christ said he would build the church.  It is written to a number of congregations, geographically spread through parts of the Roman empire.

Repeatedly, it encourages Christians to endure suffering and persecution, but not to lose faith.  After all, suffering is not an unChristian thing, but the most Christian thing because Jesus himself suffered on earth because of his teaching and his example.

If people are to claim a new identity through Jesus, if they are to become Christians, which is to become a part of God's now chosen nation, they must follow the teaching and example of Jesus in their lives.  Only through such obedience and perseverance can they live up to God's expectations for them and for their lives.

Such faith requires them to endure suffering and punishment with patience and grace.  They must accept the authority of others -- not just in the church, but those who have authority in the wider culture too.  They must turn away from the mistakes and sins of humanity and focus on the principles of faith taught by Jesus -- love, service to others, and obedience to God.  The reward for such faith is salvation and eternal peace.