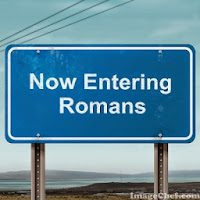 Romans is the first of a lengthy series of Christian letters preserved in the New Testament, one of fourteen attributed to Paul, whose travels and ministries were described in the Acts of the Apostles.  The order of Paul's letters is not random.  They are divided between letters to congregations, followed by letters to individuals and are then sorted longest to shortest.

Romans is a unique letter for Paul (as will become clear as we read the others).  While Paul planted many congregations through his travels, and wrote letters of encouragement and instruction to them, he did not begin the church in Rome.  Instead, this letter was meant to serve as an introduction before Paul arrived in Rome.  This allows Paul to lay out his beliefs in a more systematic way than in other letters.  So the letter to Romans can be read as a theological essay that explores the need for faith, the possibility of faith through Jesus Christ, and the consequences for one's life when one becomes a Christian.

However, this letter also is meant to address a key issue that Paul has heard about (like most people, Paul always has a reason -- a motive -- for writing): friction between Christians who had been Jews and those Christians who had never been Jews.  It seems that there was a lot of controversy about how much of Jewish teaching in the Hebrew Bible (Old Testament) Christians had to follow.  Some believed that Christians needed to follow Jewish Torah; others believed that Jesus' teaching and example rendered the law unnecessary.

As described in Acts, Paul's ministry was intended to spread the teaching of Jesus Christ to non-Jews (often called Gentiles in the New Testament).  However, he had been raised and educated as an observant Jew.  He values both sides of the controversy, and he repeatedly insists (here and in other letters) that both Jewish and non-Jewish converts are good Christians.  He believes that there are more important things in faith than Jewish Torah -- so while there are good reasons to follow this teachings, they are not necessary to Christian faith.

Paul tries to justify this position throughout his theological essay in Romans.  He explains that all people have sinned and need God's salvation -- and that, through Christ, God offers that salvation to Jew and non-Jew alike.  Paul affirms that God revealed Torah, but says that the covenant of faith exemplified by Abraham is deeper and truer than following Torah.  Instead, Christians must focus on how they live with one another in love, acceptance, and sometimes forgiveness.