Humans Against God & The True Value of Jewish Law 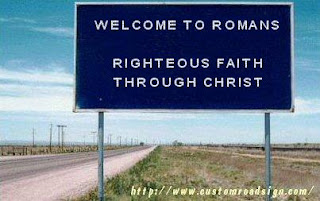 Today's first reading is the powerful opening of Paul's extensive exploration of the meaning of Christian faith in his letter to the church in Rome.  Evidently, the young congregation was dealing with issues of having both Jewish and Gentile Christian converts.  Paul emphatically says that anyone who has true faith will be saved through Jesus Christ -- in some ways, this is the "thesis statement" of Paul's entire argument in the letter.

After this, though, Paul explores the need for Christian faith.  Briefly, he points out the general ways that human beings have turned against God.  In essence, humans have believed themselves smarter about the way things are than the creator of the universe, God.  From this false assumption, people developed all sorts of bad and sinful habits.  As a consequence of this sinfulness, humans have no claim on God's promise of eternal life.


The second reading extends the argument in relation to Jewish Torah.  Paul, who was born and educated as a Jew, has extensive personal knowledge of the Jewish tradition.  Many Jews rightly recognize that Torah was a special revelation from God as part of the covenant between God and God's chosen people.  However, Paul stresses that Torah only teaches people right from wrong; they still have to follow the law for it to be effective.  Even more, Paul notes that some people can follow Jewish Torah without knowing that law (basically from learning about God through what later theologians would describe as Natural Law -- revelations about God that can be identified through observation of the created world).

The point of this argument, as will become clearer as the letter goes along, is that both Jews and Gentiles can become faithful Christians.  Instead of judging each other -- and this was especially pointed at Jews who had become Christians and were judgmental of non-Jews who became Christians -- they should focus on obeying the spirit of God's law, which was personified by Jesus Christ.


If you are planning to read the Bible in its entirety, you should read Romans 1-3 today.