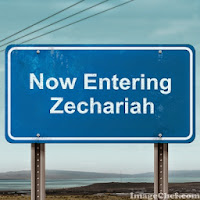 Zechariah was a prophet during the final days of the exile in Babylon.  In fact, Zechariah's prophecy dates to the years just after the Persian empire, under Darius, defeated the Babylonians.

Above all, Zechariah promises that God will restore Jerusalem.  The holy city will be filled with people faithful to God.  Some will come from those who have remained faithful while in exile.  Others will be drawn from the four corners of the earth (the image of four winds and four directions as covering the entire earth is repeated many times in Zechariah).  Beyond these, there will also be people of other nations who will become fully faithful to God.

This promise is repeated through a series of visions, which involve horses, a man measuring the city of Jerusalem (an echo of the more extensive vision in Ezekiel), a new high priest, a flying scroll of punishment, and four chariots that patrol the earth on God's behalf.  In these visions, God's anger has turned to others who oppress the powerless, and God's favor has returned to the faithful remnant of Jews.

The restoration of Jerusalem will not be easy, though.  Time and again, there are hints of the challenges ahead.  Those in power who oppress God's people need to be dealt with and overcome.  Even more, those who believe they have been faithful, but have not must be dealt with (lest they imagine that God is rewarding them and lest they try to lead the true people of faith astray).  This will culminate in a final battle between God and the powers of earth.  These earthly powers are no match for God, but still they must be controlled fiercely so that the new Jerusalem will be safe from any outside threats in the future.  (Unlike other such visions of a final battle, like in Revelation, all of these people do not need to be destroyed; here, they simply must be subdued.)