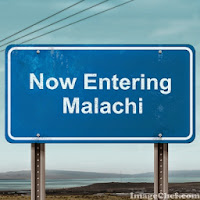 Malachi is the final book of the Christian Old Testament.  (It is not the last book in the Hebrew Bible because the Jewish tanakh is puts the books in a different order.)  It dates to the period after the Jews had returned from exile in Babylon to the restored Jerusalem and after they had rebuilt the Temple.

Despite all of God's hopes for this faithful remnant in returning to Jerusalem, though, the people have let God down.  They seem unable to focus entirely on God's teaching.  Instead, they still are influenced by the teachings and traditions of foreign religions -- probably because they keep marrying foreigners who were raised to follow those teachings and traditions.

In particular, God is unhappy with the Temple priests, who seem to facilitate the people's unfaithfulness.  They offer imperfect animals -- blind, lame, or sick -- as sacrifices to God.  They allow the people to not fully pay their tithes to the Temple.  And they are incapable of clearly distinguishing God's law -- which much be followed -- from the lesser teachings of other gods.

In the end, God renews the warning of a coming Day of the Lord, when the unfaithful will be punished and destroyed and the faithful will be rewarded.  Before this day of judgment, God will send a messenger -- evidently, the prophet Elijah, who will make one last attempt to properly teach God's laws to the people.  Hopefully the people will turn from their unfaithfulness and become faithful to God before the Day of the Lord.