The End of Idolatry and God's Final Battle 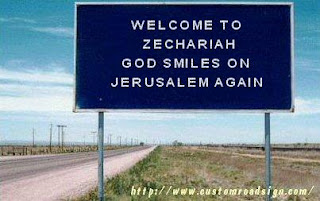 Today's first reading is about the final end of the idolatry which has plagued God's people for too long.  God promises that the names of the false gods will be wiped from the earth and forgotten.  And the leaders and prophets who have supported these false gods -- often with false teachings and false prophecies -- will be silenced.  Only the faithful -- perhaps one-third of the total number of Jews in exile -- will be claimed by God and brought into the new Jerusalem.


The second reading is the conclusion of Zechariah's prophecy.  It promises a final battle in which God will confront all of the unjust and evil powers on earth and defeat them.  There will be terrible plagues for all of the people who are not faithful to the one true God.  Then, those who remained faithful will be fully restored to live and worship freely and in peace.


Reading the Bible in Its Entirety

If you are planning to read the Bible in its entirety, you should read Zechariah 12-14 today.