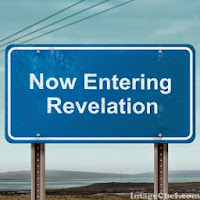 Revelation is the final book of the New Testament and the Bible.  In some ways, it complements the first book of the Bible, Genesis, which tells the story of how God created the world and how God established a relationship with human beings (what we generally call faith).  Revelation predicts the destruction of this world and the beginning of a new world for those who have been faithful to God.

Ostensibly written to seven congregations then enduring persecution. Revelation promises God's final judgment, which offers the reward of salvation to some and the punishment of destruction to others.  This final judgment, though, will not happen quickly -- it will be preceded by a period of even worse suffering and persecution for those who are faithful, retaining their right relationship with God.  (In some ways, these period of suffering and persecution seems a mirror image of birth pains.)

The prophecy of Revelation is filled with images meant to correspond to various rulers and empires.  For centuries, Christians have argued over which nations are the final seven to rule the earth and who are the great beasts who have acted as unholy tyrants and who is the terrible Antichrist leading people away, frequently suggesting different answers that prove that their times are the endtimes of Revelation.  While this is an interesting topic of conversation and study, the readings this week are meant to provide an understanding of the overarching vision of Revelation, without digging into these issues.

Ultimately, this is a book about the end of this world and the beginning of the next.  Revelation warns not only of God's final judgment of the earth -- the Day of the Lord promised by the Jewish prophets -- but promises that those faithful to God have a hope beyond this punishment, an unending life in God's new heaven, a massive city of gold that is also the City of God.