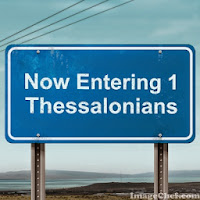 1 Thessalonians is probably the oldest letter in the New Testament.  In it, the apostle Paul offers encouragement to the young congregation in the Greek city of Thessalonica.  In general, he is worried that they are facing persecution from city leaders and Roman officials.

Unlike other letters from Paul, there does not seem to be an explicit agenda.  He is not correcting bad teaching or bad habits.  Instead, he is simply following up on the time he spent establishing and nurturing the Thessalonian congregation, reminiscing and offering encouragement.  In fact, much of the letter is devoted to praise and thanksgiving for the Thessalonians and their faith.

The only issue that Paul addresses directly relates to what happens to Christians after they die.  Some Thessalonians were worried that the Christians who had already died would miss out on God's salvation when Jesus returns.  Paul says that the opposite is true -- the dead are raised from their graves and lead the faithful into heaven.  Until then, the Christians on earth simply need to keep the faith and look forward the Jesus' return.