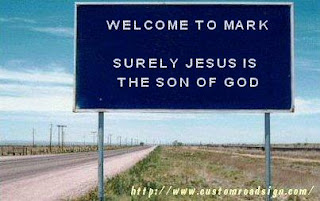 Today's first reading is Mark's heartbreaking account of Jesus' crucifixion.  Despite his arrest, it is clear that Jesus does not have to die because the Roman authorities are eager to kill him.  In fact, Pilate (the governor) tries to release Jesus based on the crowd's desires; however, the crowd asks for a murderer to be released instead.

Again and again, Jesus is mocked and belittled.  The soldiers mock him as a would-be king, then dividing his clothes (likely his only possessions) among themselves.  They impose on a random person the task of carrying Jesus' cross to the crucifixion, where he was executed among common thieves.  He was completely abandoned, except for a few women (including his mother) who watched from nearby.  After his death, though, one of the Roman soldiers unexpectedly realizes Jesus' true identity as the Son of God.


The second reading is the original ending of Mark.  It describes the day of Jesus' resurrection.  Two women had come to take care of Jesus' body, but the discovered the empty tomb.  Inside, a young man tells them that Jesus has gone ahead to Galilee (which was where Jesus' ministry had begun), and they should tell the disciples to meet him there.  This turn of events left the women completely terrified.

Perhaps you can understand why this ending was so unsatisfying to readers, especially if you know about the many occasions when Jesus met people after his resurrection.  So later editions of Mark includes a couple of these instances.  Some historians have speculated that Mark's original ending was intended to encourage people to go back and read the entire book again, so they could better understand Jesus' teachings and identity as the Messiah.


If you are planning to read the Bible in its entirety, you should read Mark 14-16 today.