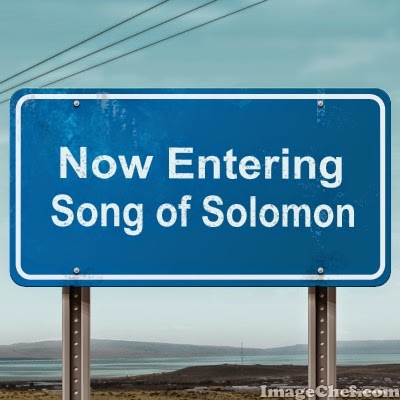 The Song of Solomon is a love poem that explores the depth of emotions between a man and woman in ancient Israel.  It is a conversation between the couple -- with occasional lines from groups of friends or observers -- that can be difficult to follow because there are times when it is unclear who is speaking certain lines.  (Some Bibles have allowed translators to suggest who is speaking throughout the poem, but this is a matter of interpretation.  Such notes make the poem a little easier to read, however.)

There is very little overt religious material in the Song of Solomon, which has led many to ask why it is included in the Hebrew Bible.  Many theologians -- both Jewish and Christians -- have suggested through the centuries that the Song of Solomon should be read and understood allegorically.  The passionate relationship between the man and woman are metaphorical of the passions that should be in the relationship between God and God's people or between Christ and the church.

These metaphorical readings make for interesting theological discussions and raise a host of interesting possibilities about our relationship with God -- so if they intrigue you, feel free to explore such a reading this week.  However, there is value in accepting the Song of Solomon at face value. So much of the Bible focuses on the relationship between God and humans, but there is plenty of evidence in the Bible that God also wants humans to have significant relationships with each other.  Here is a poem in which both the man and the woman both speak for themselves and have desires for themselves and for their own lives.  (This is unusual in ancient literature, which is overwhelmingly male-dominated.)

While not all human relationships are romantic, the depth of a romance can offer clues to the ways humans love others too.    The Song of Solomon explores love between people that isn't based on wealth or the arrangements of others -- in fact, it seems to exist despite some opposition.  In language filled with a variety of natural imagery, including a fair amount of innuendo, it tells how the eyes of love see others differently, how absence makes the heart grow fonder, how love can make people feel as honored and special as royalty.