Where Is God's House? 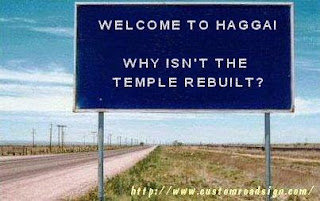 Today's reading is the beginning of Haggai, who prophesied at the beginning of the return from exile in Babylon.  While the histories of Ezra and Nehemiah suggest that the returning Jews were eager to rebuild the Temple and city wall, Haggai suggests differently.  Instead, the people worked hard to build their own houses and plant their own crops.  However, their hard work did not yield much.  The land was gripped by famine.

Haggai told the people that the reason for this was God's unhappiness that they had done nothing about the Temple, which laid in ruins.  Until this changed, God would continue to limit the fruits of their labors.  After hearing this, the people began to rebuild the Temple.


If you are planning to read the Bible in its entirety, you should read Haggai 1 today.